For centuries, people who have been persecuted for religious or political reasons have sought protection in Switzerland. The reason for this lies not only in Switzerland’s geographical position but just as much so in the political, religious and cultural diversity of the country.

At the time of the Reformation and Counter-Reformation, it was mainly refugees fleeing from religious persecution who sought asylum in Switzerland. The Huguenots fled mostly to Geneva, where Calvin had settled; following the St. Bartholomew Massacre in August 1572, more than 2,000 French families arrived in the city. After the Edict of Nantes had been revoked in October 1685, there was a large influx of Huguenots into the Protestant areas of the Swiss Confederation. For obvious reasons the Catholic cantons did not take in any refugees, but tried rather to stop the influx. On 30 August 1687, the gate-keeper at the Porte Neuve in Geneva counted 800 new arrivals. After 1686, the Waldensians (from Piedmont) also fled to Switzerland.

By the beginning of the 18th century, approximately 20,000 religious refugees were living in Switzerland, 6,000 of whom alone lived in Bern and relied on state support and private charity. Within a generation, around 140,000 refugees had come to Switzerland; Louis XIV became highly indignant of Switzerland’s generous admission policy.

This was an era in which great sacrifice was demanded from the local population; the refugees, in turn, provided Switzerland with great new spiritual and materialistic impetus. However, many areas only admitted rich and skilled refugees, whilst those who were poor or unskilled were turned away or refused naturalisation.

After the French Revolution and in the 19th century

After the French Revolution and in the 19th century, it was mainly refugees fleeing political persecution who entered Switzerland. The admission of such refugees often led to internal political disputes and to serious conflict with foreign governments. In 1837, war nearly broke out with France after the country mobilised 25,000 soldiers in order to press for the extradition of Louis Napoleon Bonaparte, who later became Napoleon III. Fortunately, Bonaparte left for England on his own initiative, which is why it never came to war.

As a result of the suppression of the liberal movement after the Congress of Vienna and the revolutions of 1830, the liberal cantons in Switzerland granted protection to refugees from France, Piedmont, Germany and Poland. As the only liberal state emerging from the 1848 revolutions, Switzerland came under great pressure from its neighbouring countries on account of its refugee policy, and was therefore occasionally forced to expel some refugees. Following the enactment of the German Anti-Socialist Law in October 1878, which was passed to curb the growing strength of the Social Democratic Party, numerous party members sought and obtained refuge in Switzerland. The flow of refugees in the following decades consisted mainly of anarchists, nihilists and members of similar socialist and communist movements, who were tolerated as long as they remained in the background. Lenin and Trotsky were two such persons who spent time in Switzerland.

During the First World War, Switzerland took in mainly deserters and civilian evacuees.

Eduard von Steiger, a federal councillor at the time of the Second World War, did not share the views of one of his predecessors, Numa Droz, on the granting of asylum. It was Steiger who in 1942 used the metaphor of the "densely occupied lifeboat”. In August of the same year, the borders were closed to people fleeing racial persecution, in particular the Jews. In 1956, immediately after the uprising and intervention of Soviet troops in Hungary, Switzerland temporarily admitted 14,000 Hungarian refugees, of which 7,000 remained in the country. In 1959, refugees from Tibet were admitted. Following the intervention of Warsaw Pact troops in Czechoslovakia in 1968, around 12,000 Czechoslovakian refugees – mainly highly qualified workers and academics – fled to Switzerland and were welcomed, on the whole, with open arms.

In 1973, when the Chilean government under Allende was toppled, the Federal Council decided to admit not more than 200 refugees from Chile. This declaration of intent was met with opposition, which forced the Swiss authorities to admit moreChilean refugees into the country. Between 1975 and 1983, 8,200 refugees from Southeast Asia were granted political asylum. When martial law was declared in Poland in 1981, 2,500 Poles were granted refuge in Switzerland.

The asylum situation has changed somewhat since the early 1980s. The number of asylum applications has increased considerably, as has the number of countries from which asylum seekers come. Many of them originate from Sri Lanka, Turkey, Iraq, the Balkans, and from various African nations – a result of greater mobility and globalisation. During the war in Bosnia from 1992 to 1995, Switzerland admitted nearly 30,000 refugees. This number increased to 53,000 during the Kosovo conflict between 1998 and 1999. Since the Millennium there have been marked fluctuations in the number of people seeking asylum in Switzerland. Requests for asylum stabilised at around 20,000 annually in the early 2000s, falling to around half this number in the middle of the decade, before rising again thereafter. Between 20,000 and 28,000 asylum applications submitted were each year from 2011, with the exception of 2015, when a record 39,500 applications were made as extraordinarily large numbers of migrants entered Europe. This was the greatest number since the end of the Balkan wars. In the following years the annual number of asylum applications again fell sharply, and in 2017 was below 20,000. 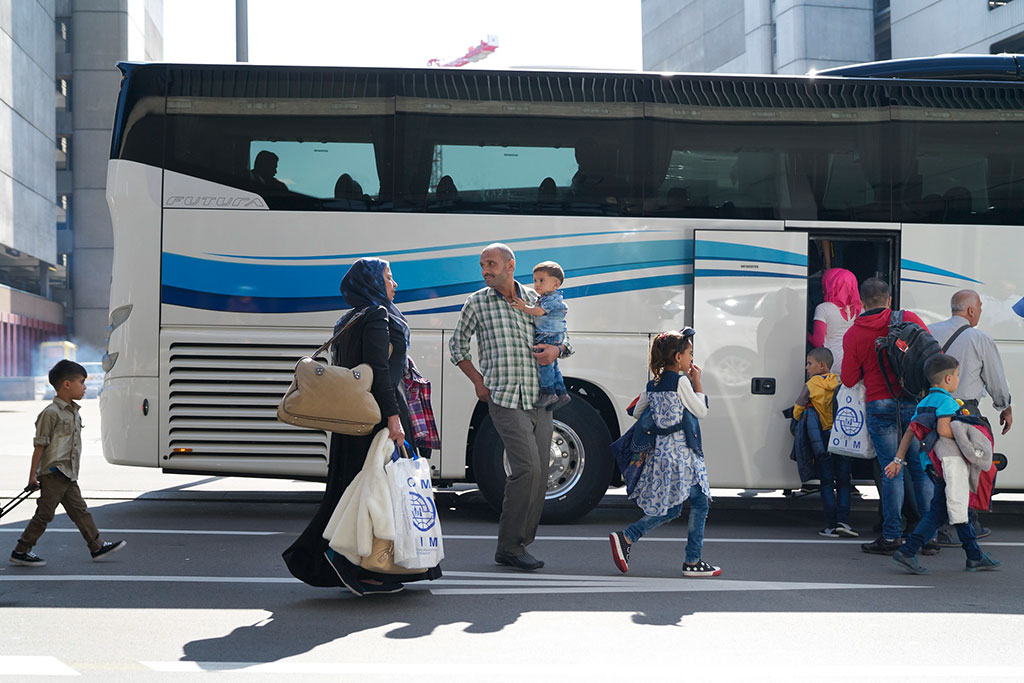 A group of resettlement refugees get on a bus at Zurich airport. (photo: SEM © Gerry Amstutz)

Since 2013, Switzerland has increased its involvement in the UNHCR resettlement programme, which is aimed at particularly vulnerable people in an asylum country who have received refugee status from the UNHCR. In 2016 and 2017, Switzerland also took part in the EU’s relocation programme, in which asylum seekers who are already registered in Greece or Italy are transferred to other European states. This programme aims to relieve the burden on these two countries situated on the edge of Europe, both signatories to the Dublin Agreement, which have to deal with particularly high numbers of asylum seekers.