Temporarily admitted foreign nationals are persons who have been ordered to leave Switzerland and return to their native countries but in whose cases enforcement of this order has proved unlawful (violation of international law), unreasonable (genuine risk to the foreign national concerned) or impossible (for technical reasons of enforcement). Their temporary admission is therefore an alternative measure. Temporary admission may be ordered for a duration of twelve months and be extended by the canton of residence for further twelve months at a time. A person who has been temporarily admitted is permitted to work anywhere in Switzerland. Their employer must simply notify the competent cantonal authority when employment begins and comes to an end. If a person who has been temporarily admitted subsequently applies for a residence permit, the procedure is governed by Article 84 paragraph 5 of the Foreign Nationals and Integration Act.

This permit does not serve as evidence of the holder’s identity. 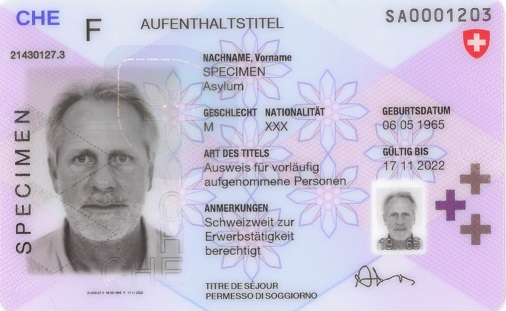